Objectives are designed within the milieu of Municipal government objectives as set out in section 152(1) of the Constitution referring to the objective “To promote a safe and healthy environment” including the Principles of the National Environmental Management Act (NEMA) and the Bill of Rights as stated in the Constitution. 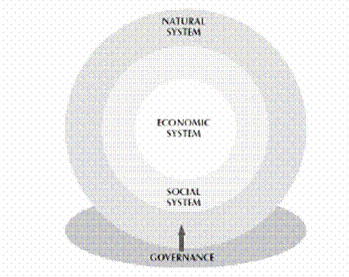 Government’s commitment to long-term sustainable development is achieved, when explicit recognition is given in its policy-making processes that its economic systems are essentially products of and dependent on social systems, which in turn are products or, and dependent on, natural systems.

Effective management of the interdependencies between ecosystem health, social equity and economic growth will further require a significant change in current governance practices, in adopting an integrated and co-operative environmental management approach to governance that includes an accurate valuation of environmental goods and services.

What is Environmental Management:

Environmental management is “a purposeful activity with the goal to maintain and improve the state of an environmental resource affected by human activities.

Environmental Management can be defined as “the management of the interaction and impact of human activities on the natural environment”.

Environmental management further aims to ensure that ecosystem services and biodiversity are protected and maintained for equitable use by future human generations, and also, maintain ecosystem integrity as an end in itself by taking into consideration ethical, economic, and scientific (ecological) variables. Environmental management tries to identify the factors that have a stake in the conflicts that may rise between meeting the needs but protecting the environment.

In particular, the Bill of Rights stipulates that:

“Everyone has the right –

(a) to an environment that is not harmful to their health or well-being; and

(b) to have the environment protected, for the benefit of present and future generations, through reasonable legislative and other measures that –

(i) prevent pollution and ecological degradation;

Schedules 4B and 5B contain a total of 38 ‘local government matters’ which, under the subsections above, are the responsibility of local government. The following are of particular relevance to the management of the environment:

The following principles reflect the core values of NEMA:

Statutory obligations and Acts with regard to Environmental Management:

Land Use Planning Ordinance (Ordinance 15 of 1985)

Is the Emergency number for the Fire and Medical Services within the West Coast District.